This tale would be completely unbelievable if it did not begin with the words, “We were five minutes late leaving home”.  Hence this tale is unbelievable as it begins with the words, “This tale…”.  A combination of Eric’s directions and Mum’s driving conspired to make us twenty minutes later at Reading Garage, where we picked up Eric, Ian and Alan. All this became highly insignificant when Eric uttered the words, “I’v 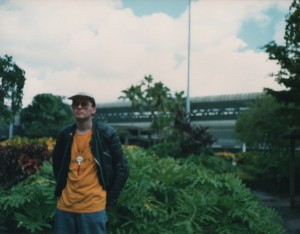 e left my wallet in Reading”, on arrival at Heathrow.  Eric took Mum’s car and drove back to the garage, whilst Ian, Alan and I checked in.  Ian’s bass guitar (in hard case) had to go through twice, as all the security man could say the first time was, “What the hell’s in here?!”.

Johnny and Wayne arrived on the airport link bus and promptly disappeared and Eric overheated the car but eventually we were safely on board Pan Am 099 to Miami.  It was a shame that they ran out of beer but the double scotch did nicely, thank you, and this, combined with the drastic editing, convinced me that I hadn’t in fact seen Star Trek V before.  Amazingly my ears held up on the descent to Miami International Air

port, where the temperature was 82 degrees and the humidity 92%.  Someone quoted us almost our entire spending allowance for a taxi into town, so we hired a car – a Dodge Shadow – for our trip to Power 96 FM, for whom we may do an interview on the way home.  Personally I found Miami (North, South and Beach) tedious, the “highlights” being someone threatening the assistant in a corner store and the fuzz booking the car next to us for being in a disabled only space.  At 11pm we crashed out in MIA Concourse C, being unable to take any more of Eric’s driving.  Perhaps we’ll have some tickets to Belize in the morning.