I awoke this morning almost voiceless and still ‘affected’ by the night before.  A shambolic stumblingness of musicians were roused by Eric the Impresario at a quarter to nine to pack up all the gear that we’d left lying around the previous evening.  Having done this, anyone who had any sense went back to bed and a handful of people went into

Belize City to retrieve passports with visas for the trip to Mexico.  After lunch, a series of tedious conversations with Andy Pandy ensued about a special request gig we’re to do for last night’s squaddies on Wednesday, and then we left for a civilian gig at Belmopan, on the way to Holdfast Camp, at 3:15 PM.

Having stopped at JB’s Bar, we arrived at 5:15 at a cinema with a smallish stage and tiered seating.  After we had soundchecked, Hubert, the Barbadian caretaker, took Alan, Johnny and myself back to his place so that we could freshen up.  I just managed to be the only one not to shout out when the freezing cold water hit me.  The show went really well until Brad, who had been 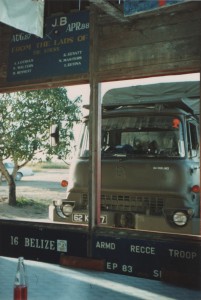 compere at the Belize City gig, decided to attempt to steal the show and ended up just looking like a prize plonker and making a mess where order had been.  Cat ‘n Fiddle went down OK and so did we – with the half of the audience who hadn’t left!  We were supposed to do a finale with Davinox and Cat ‘n Fiddle but Brad had wittered on for so long that all the timing was screwed up.  The funniest part of the evening was Davinox and his “black Tom Jones” vocalist doing an impassioned song called “Don’t Take Drugs”, as the audience all merrily quaffed their ‘loopy juice’, otherwise known as Belikin, the local beer.  Well, a good time was had by all in the truck on the way home!