I don’t know where this morning went to but the first thing that seemed to happen today was lunch.  After this we all piled round to the Warrant Officers’ and Sergeants’ mess to set up the gear for this evening’s show.  As Eric wasn’t there, I was in charge, and fortunately everything went smoothly.  At around five o’clock I sat down and composed a two-side report to Venue Magazine, which will be sent off as soon as everyone has read it.  Then we all sat around waiting for our spot which was to be at the end of the show.  Alan, Ian and I trundled off for a while to the Junior Ranks Club, where we will be playing again tomorrow, and I met a guy from Cheddar and another from Gloucester (no doubt facilitated by my Bristol BeastSoc t-shirt).

The show went down reasonably well and our acceptance level surpassed expectations, even though the 12-bar blues finale 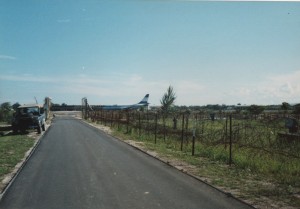 with Cat ‘n Fiddle and the dancers was the biggest shambles I’ve seen for a long time.  Now it was time for the fun to start.  Cat ‘n Fiddle did an acoustic set in the Sergeants’ Bar and raised a fair amount of dosh; then, various band members and half of APC got up on stage and had the most horrendously tuneless and directionless jam you are ever likely to hear.  All the time, everyone was getting ridiculously drunk – I was on the rum ‘n cokes – and it was 2AM before people started crawling off to bed.  For some strange reason I managed to cover my own bed in tobacco and then went to sleep on Alan’s, but why is something we will, as like as not, never know.