Don’t you just love drunken Scotsmen? No, not really, when they stumble in at five in the morning, having fallen in the Estuary, and claiming that everyone in their blurred sight has stolen their bunk! We all muddled in to make breakfast for ourselves and the crew and then moved to the other RPL which would be taking us to San Pedro, the largest town on the Belizean Cayes. Johnny and Ian’s quest for cheap beer almost resulted in them missing the boat but they joined the rest of the bands, the crew and Andy, our driver’s regimental mates from 24 RCT on board just before we set sail.

Set sail is a bit of a misnomer, as the twin-engined landing craft chugged its way slowly across the Caribbean Sea. I really don’t know what the hell people were trying to do, fishing in the wake; suffice to say nothing was caught, except the sun. On arrival we set up the kit in an open air basketball court on the seashore and the show began at 19:30, with only Cat ‘n Fiddle and ourselves performing. An improvement on previous 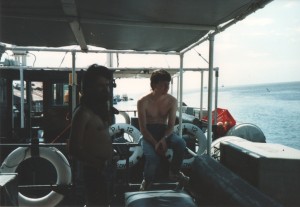 mishaps, I mixed the sound for Cat ‘n Fiddle and Joe (woodwind, guitar, vocals) did likewise for us.

After the gear was packed up, Cat ‘n Fiddle played an acoustic set in a local bar and everyone got riotously drunk. I stumbled home to our luxury, freebie hotel with them but had neglected to find out which room I was supposed to be in, hence I curled up at the foot of Joe’s bed until Eric came to drag me to my proper station. He only got me as far as the outside corridor, where I curled up, refusing to budge, “cuddling” a pot plant. When the caretaker threw a bucket of water over me, I retreated once more to Cat ‘n Fiddle’s room.